On the morning of Sunday, March 17th terror attacks took place at two locations in Samaria.

“One Israeli was killed and two were critically injured in a pair of shooting attacks in the northern West Bank on Sunday, the military said.

The attack began at around 9:45 a.m. near the Ariel Junction, where the terrorist assaulted a soldier with a knife and managed to gain control of his weapon, IDF spokesman Lt. Col. Jonathan Conricus said.

The attacker then fired at passing vehicles, hitting a civilian in the first vehicle. A second vehicle was hit, but managed to flee the scene. A third car stopped, and the attacker, whom Conricus said “appears to be a Palestinian,” took it and fled the scene. […]

Conricus said that the suspect then continued to the nearby Gitai Junction, where he shot at a soldier standing at a hitchhiking post, injuring him. […]

The guest appearing in the March 13th edition of the BBC’s interview programme ‘Hardtalk’ was Israeli author Ayelet Gundar-Goshen who has previously appeared in BBC content.

“Stephen Sackur speaks to Ayelet Gundar-Goshen, a prize-winning Israeli novelist who brings a trained psychologist’s eye to compelling stories set in her home country. Hers is a world of moral ambiguity where truth, memory, right and wrong aren’t necessarily what they seem. Does her work tell us something important about the Israeli psyche?”

On several occasions throughout the interview, Stephen Sackur employed fictional characters and quotes from Gundar-Goshen’s novels to try to support his own narratives concerning Israel and Israelis…

When the BBC News website finally got round to informing its readers of the rocket fire on Tel Aviv that occurred on the evening of March 14th it did so – over 15 hours after the event – using the frequently seen ‘last-first reporting’ formulation: “Israel strikes militant sites in Gaza after rockets fired at Tel Aviv”.

“Israel has carried out dozens of air strikes on Palestinian militant sites in Gaza in retaliation for the firing of two rockets towards Tel Aviv.”

In its opening paragraphs the report told readers that:

“Hamas, which dominates Gaza, insisted it was not behind the rocket fire.

Israeli media are citing an Israeli defence official as saying that the rockets may have been launched “by mistake” while maintenance work was being carried out.”

Even though it later repeated Hamas’ denials, the BBC did not bother to clarify to readers that…

In the original version of its February 6th report on a terror attack near Ariel – “Israeli man stabbed to death at West Bank settlement” – the BBC News website claimed that: 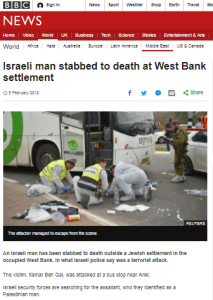 “It [the attack] comes a day after Israel retroactively legalised an unauthorised settlement outpost in response to the killing of a resident last month.”

A later version of the same report included the same claim:

As was noted here at the time:

“Both those statements are inaccurate and misleading: Havat Gilad was not “retroactively legalised” on February 4th as the BBC claims. Rather – as the Times of Israel reported: [emphasis added]

The indefatigable David Collier has published a long two-part report about a secret Facebook Group called ‘Palestine Live’ that includes among its membership Holocaust deniers, antisemites and conspiracy theorists.

Part one of the report can be found here and part two here.

The group was founded in 2013 by a London-based anti-Israel activist called Elleanne Green.

“The group is listed as ‘secret’. This means you cannot find it by using the Facebook search function and need to be invited or added by someone inside the group who has permissions to add new members. It changed from ‘Closed’ to ‘Secret’ in early November 2014.

Elleanne Green is an admin of the group, and the most prolific contributor. She is well-linked with other activists across the globe. Possessing an impressive networking skillset, Elleanne Green turned Palestine Live into one of the largest, and well-connected of the anti-Israel groups. Palestine Live…

Next week will mark forty years since the Coastal Road Massacre took place on March 11th 1978. Thirty-eight people – including thirteen children – were murdered and seventy-one wounded in that Fatah perpetrated attack, making it the single most deadly terrorist attack carried out in Israel.

“During the Jewish Sabbath, March 11, 1978, twelve members of a Palestinian terrorist cell led by female terrorist Dalal Mughrabi landed on a beach near Ma’agan Michael, north of Tel Aviv, having departed from Lebanon with a stash of Kalashnikov rifles, RPG light mortars and high explosives. They walked less than a mile up to the four-lane highway, where they began a murderous rampage, opening fire at passing vehicles before hijacking a bus en route to Haifa. They murdered American photo-journalist Gail Rubin, who was taking nature photographs nearby.

The terrorists continued to fire and throw grenades at passing cars, while…

The episode aired on March 4th (and to be rebroadcast on March 10th) is called “The Bethlehem Murders” and – despite the BBC’s style guide stating that “you should not affix the name ‘Palestine’ to Gaza or the West Bank” – it is described in the synopsis as: [emphasis added]

“Crime fiction set in Palestine. Omar Yussef, schoolteacher and amateur sleuth, tries to clear the name of his former student George, falsely accused of murder in their hometown of Bethlehem. […]

In The Bethlehem Murders, Yussef tries to save the life of his former student George Saba, a Christian recently returned to his home town of Bethlehem, who has fallen foul of a Palestinian militia group. In doing so…

“The British taxpayer has handed over more than £6 million to charities that are currently, or have been in the past, used by extremists to further their radical agenda, according to a new report from the Henry Jackson Society. […]

Wolves in Sheep’s Clothing: How Islamist Extremists Exploit the UK Charitable Sector finds that, despite more than a decade of attempts to improve regulations, a concerning number of UK-registered charities continue to fund and support extremism.

Figures from across the Islamist spectrum, including the Muslim Brotherhood, form a network which seeks to delegitimise and push out moderate voices, while masquerading as representatives of ‘true’ Islam. […]

The Charity Commission – legally unable to de-register these ‘bad’ charities – has been particularly ill-equipped to deal with these organisations. Its powers have been extended in recent legislation, but the…

As we saw in part one of this post, an item (from 30:05 here) aired in the January 3rd edition of the BBC World Service radio programme ‘Newshour‘ that purported to examine the question of “who would lose out the most if President Trump followed through on his threat to cut funding to the Palestinians?” opened with promotion of the views of the PLO’s Hanan Ashrawi and then went on to feature a fellow at a think-tank who has advocated for sanctions against Israel. 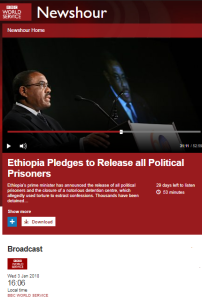 The third and final interviewee in the item did nothing to counter its homogeneous portrayal of the topic. Presenter Julian Marshall introduced him as follows:

Marshall: “And Ziad Khalil Abu Zayyad is international spokesman for President Mahmoud Abbas’ Fatah party. So could the Palestinians really do without this American money?”

Abu Zayyad: “Well the thing is that when the Palestinian Authority was established…